What I learned from my black, teen-age neighbor

I love my neighbors.  My immediate next-door neighbors are my new best friends - Judson is 7 and his sister, Karis, is 6.  Their 2 other sisters and their parents are pretty awesome, too.  We have Jesus in common and like to play catch or cards or just eat popcicles on the porch.   I love my other neighbors, too.  The ones who are walking from the homeless shelter a few blocks away down to the plasma donation center a few more blocks past our home.  God is teaching me about building community.  about knowing the people in my neighborhood. about tending my garden.

There are still some things that feel clunky.  Times when I feel intimidated or catch myself with a judgemental thought or sarcastic joke at someone else's expense (someone whose story I haven't learned yet).  The mentally ill and neighbors who are under the influence of drugs are alcohol still seem like wild cards to me.  My standard MO is an acknoledgement that can't be interpreted as too agressive or too welcoming, so as not to draw their chaos inside the fence.

This week, he taught me something from a teenage boy.  I don't know his name, but I've seen him walking his siblings to school in the mornings or home in the afternoon.  He has a flip phone, but I haven't seen it close enough to know if it's one of those really new ones, or if it's actually really old.

It started when I heard a normal occurrance: a young man who I assume is high or mentally ill, riding his bicycle down the street, talking to himself loudly and using colorful language and making little sense.  The teenager is walking down the street towards the man and must have said hello or made eye contact, because the man literally jumps off his bike and quickly props it up against the corner lightpole and heads straight for the teen. My mom-senses are alerted and I wonder if this teen is in trouble.  The profanity-heavy rant is continued by the man, but is now directed at the teen instead of into the air.  I wonder for a moment if the teen knows him, or if he knows the situation that has riled up the man, but quickly decide they are strangers.  I can't see the teen's face, but I see him give the man his attention, nodding occasionally and answering the man's questions about where he stays.  After 3-4 minutes of the one-sided rant, I hear the man say, "Thanks alot, man.  You asked me my name, and that just sort of calmed me down" (as he motioned with his hands pressing down).  He reached out for a handshake/one-armed hug combo as he continued to say "thanks".

"You asked my name".

He gave the man his attention.  Asked his name.  Wasn't in a rush to get away.

And when the man felt seen, he continued on his way.

This quote was part of my Lectio365 Sabbath devotion this morning, and as I considered what this day should look like, I began considering ... 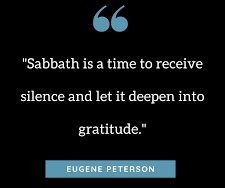 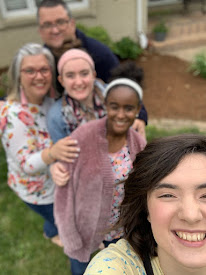